FORT CARSON, Colo. — Not since the Vietnam War has the Army punished a soldier for being too scared to do his duty.

But on Friday, Sgt. Georg Andreas Pogany will appear in front of military court here to face charges he was a coward.

The Army says he is guilty of “cowardly conduct as a result of fear” and not performing his duties as an interrogator for a squad of Green Berets in Samarra, Iraq.

But Sergeant Pogany says he did not run from the enemy or disobey orders. The only thing he is guilty of, he says, is asking for help for a panic attack. 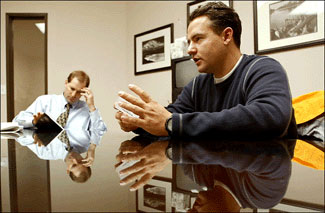 On his second night in Iraq, one month ago, Sergeant Pogany, 32, saw an Iraqi cut in half by a machine gun. The sight disturbed him so much, he said, he threw up and shook for hours. His head pounded and his chest hurt.

“I couldn’t function,” Sergeant Pogany said in an interview on Tuesday in his lawyer’s office in Colorado Springs, not far from Fort Carson. “I had this overwhelming sense of my own mortality. I kept looking at that body thinking that could be me two seconds from now.”

When he informed his superior that he was having a panic attack and needed to see someone, Sergeant Pogany said he was given two sleeping pills and told to go away. A few days later, Sergeant Pogany was put on a plane and sent home.

Now he faces a possible court-martial. If convicted, the punishment could range from a dock in pay to death.

Cowardice cases are very rare. According to the Department of Defense, in 1968 Pvt. Michael Gross was found guilty of running away from his company in Vietnam and sentenced to two years in prison. His case is the last cowardice conviction on the books.

Military officials have declined to discuss the details of Sergeant Pogany’s case. But Maj. Robert Gowan, spokesman for Special Forces Command in Fort Bragg, N.C., disagreed that a soldier would be stigmatized simply for asking for help, even among battle-hardened Green Berets.

“Special Forces soldiers are mature professionals, and they know that if someone is under stress and asking for help it is important to give it to them,” Major Gowan said.

Military officials also emphasized that being scared is not enough to be charged with cowardice. To level such a charge, Army prosecutors must have evidence that a soldier is frightened and misbehaves because of that fear.

On the official charge sheet dated Oct. 14, prosecutors say that Sergeant Pogany refused to perform his duties, which at the time were going out on missions with Green Berets and interrogating any Iraqi suspects they captured.

The Manual for Courts-Martial defines cowardice as “misbehavior motivated by fear.”

But the manual goes on to say that fear is “a natural feeling of apprehension when going into battle.”

The Military Judges’ Benchbook defines cowardly conduct as “the refusal or abandonment of a performance of duty” before or in the presence of the enemy “as a result of fear.”

Eugene R. Fidell, president of the nonprofit National Institute of Military Justice, said the way the law is written makes these cases difficult to prosecute. “Fear is an essential element of a cowardice charge,and judges know that fear is an extremely human reaction,” he said. “We have come a long way from when we shot people for this.”

Bartlett J. Carroll Jr., a retired Army colonel who prosecuted cowardice cases in Vietnam, said, “It was usually only the most severe cases we went after, like when guys repeatedly refused to get on the helicopters, even after a cool-down period.”

Mr. Carroll said the occupation in Iraq, with its steady death toll, could foment a new generation of cowardice charges.

“The first Iraq war was 100 hours, and there wasn’t enough time to be scared,” Mr. Carroll said. “But now the guys in Iraq have enough time to dwell on their mortality.”

That is exactly what Sergeant Pogany has been doing as he awaits his hearing.

The Marlboro Lights still tremble in his fingers. The body still bleeds in his dreams.

Sergeant Pogany remembers that it was midnight on Sept. 29 when he was standing in the doorway of an American military compound in Samarra, north of Baghdad. A group of American soldiers dragged the corpse of an Iraqi man right past him, he said.

The soldiers said the Iraqi had fired a rocket-propelled grenade at a convoy. The convoy fired back. The results were gruesome.

“From his waistline to his head, everything was missing,” Sergeant Pogany said.

Sergeant Pogany said he has seen the bodies of people killed in car accidents and that he is not squeamish.

“But nothing could have prepared me for that,” he said.

He also said some of the other soldiers were laughing.

Sergeant Pogany is not a Green Beret. But he had just deployed to Iraq with a team of Green Berets from the 10th Special Forces Group from Fort Carson.

Sergeant Pogany said he never told his superiors that he wouldn’t go on missions. Rather, he said that he was not fit to work and needed help.

“I wanted to speak to someone who could tell me what was going on,” he said.

A few days later, after he was confined to his room and put on a suicide watch, he was taken to a bigger base where he met with a psychologist who evaluated him and wrote, “the soldier reported signs and symptoms consistent with those of a normal combat stress reaction.”

Sergeant Pogany said the psychologist recommended he rest a few days and then get back to work.

Instead, Sergeant Pogany said he was told by a senior officer that he was a coward and he was going home and his fate was sealed. On Friday, he will appear at a preliminary hearing to determine if there is enough evidence for a court martial.

Once a rising military intelligence agent, Sergeant Pogany, a college graduate and five-year serviceman, is now left at Fort Carson loading pallets and sweeping parking lots. His gun has been taken. So too, he said, has a chunk of his pride.

“Coward is a pretty big stigma to carry around,” he said.

Correction: November 7, 2003, Friday A headline last Friday about charges of cowardly conduct filed against Sgt. Georg Andreas Pogany, an American interrogator in Iraq, misstated his connection to the Army’s Special Forces. Although assigned to a team of Green Berets from the 10th Special Forces Group, the sergeant is not himself a Green Beret.